Warning: "continue" targeting switch is equivalent to "break". Did you mean to use "continue 2"? in /homepages/44/d289637826/htdocs/gardenblog/wp-content/themes/oldpaper/framework/redux-framework-master/ReduxCore/extensions/customizer/extension_customizer.php on line 343
 jardin-perdu / Dracunculus vulgaris, Dragon arum. Arum serpentaire 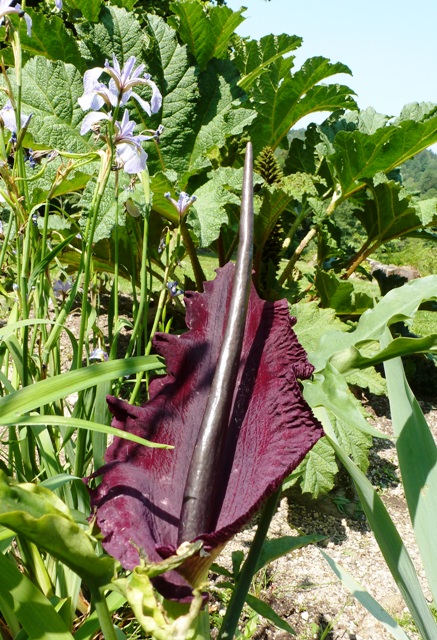 When the flower of the Dragon arum opens it’s spectacular. For over a month now I’ve checked daily to see if the purple edged elongated bud was ready to open. 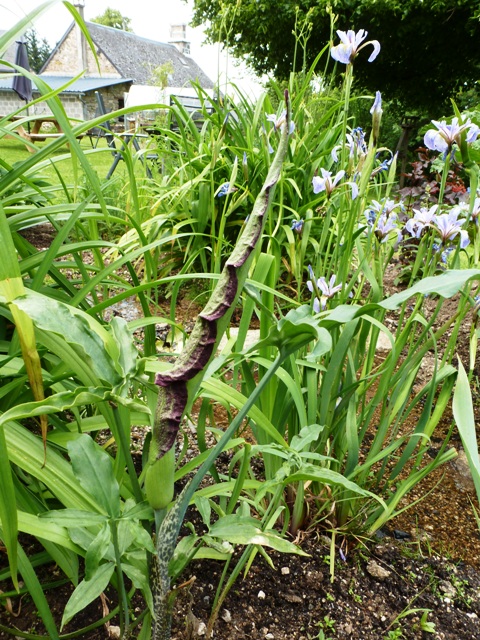 This weekend as the sun blazed down it was finally ready and the bud opened to reveal its sumptuous, deep purple hood-like spathe and blackish-purple tongue; this is certainly no shrinking violet.

The Dragon Arum is native to Eastern Mediterranean countries and so thrives in full sun, although it will tolerate partial shade. It is best planted in well-drained soil that dries out in summer. As a hardy perennial it will survive the freezing temperatures of a French winter, but I would recommend covering it with a layer of mulch to give it a helping hand.

Undoubtably this is a statement flower, a talking point for when your friends and neighbours pay you a visit and not only because of its striking looks, but also because of its scent. I say scent but whilst it may have the look of an exotic beauty it certainly has no sweetness, in fact there’s just a stench of rotting meat.

Our friends gave us this plant last year, taken from an offset in their garden so this is the first time it has flowered for us. Through fear of not being allowed to keep the plant I didn’t mention its distinct aroma to my husband. However as the flower unfolded at the weekend I was forced to quickly confess that it was the flower that stunk and that nothing had died in the pig sty it sits next to! It may have a unusal ‘scent’ but you have to admire its ingenuity; smelling of rotting meat, what better way to attract flies to help with pollination?

With its common names including Voodoo lily and Snake lily, Dracunculus vulgaris is stunning, it’s smelly, it’s altogether just plain weird and I love it. I like to think of it as having a movie star with very bad BO living in my garden.