Warning: "continue" targeting switch is equivalent to "break". Did you mean to use "continue 2"? in /homepages/44/d289637826/htdocs/gardenblog/wp-content/themes/oldpaper/framework/redux-framework-master/ReduxCore/extensions/customizer/extension_customizer.php on line 343
 jardin-perdu / Moving strawberries and shrubs in spring 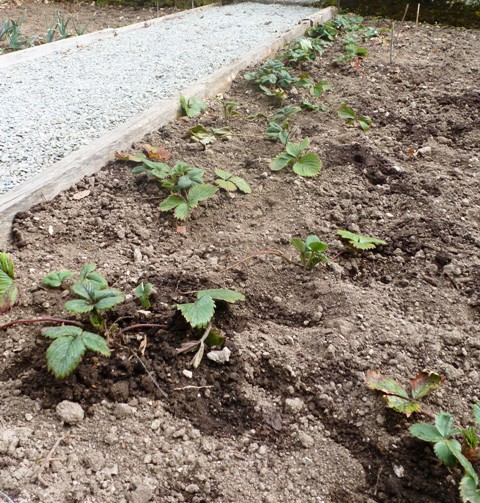 With the continuing sun here in France this last weekend I decided it was time to move. I’m not talking about me personally of course, I’m still loving it here, but a few shrubs and strawberries which had become somewhat congested in their patch.

You would normally move strawberries after they have finished fruiting in autumn, giving them chance to re-establish themselves before the onset of the winter frosts: I don’t know about you but sometimes I just don’t get around to doing things at the right time!

If like me you need to move your strawberries this spring I certainly would not leave it much later than now, or you’ll run the risk of reducing this summer’s crop.

Strawberries grow best when they have space. Last year my strawberries put forth a multitude of runners which were a nightmare to keep under control, so with new plants in abundance I didn’t have much choice but to move them this last weekend.

There’s nothing complicated about moving strawberries, just dig them up, trim off any old, bedraggled looking leaves, and pop them where you want them. Oh and don’t forget to give them some water afterwards.

Spring is also a good time to move deciduous shrubs. Again this can be done from autumn onwards when the plant is dormant, but with the harsh winters we can experience here in France I am a bit dubious about the wisdom of this and so prefer to leave this job until spring.

Last June I bought a new shrub, Physocarpus Diable D’or, which I planted in the border next to our petite source. As last summer wore on, and my Gunnera manicata continued its transformation from plant to giant, I realised that the Physocarpus was soon going to be engulfed by the Gunnera’s huge leaves; in spring it would have to be moved. 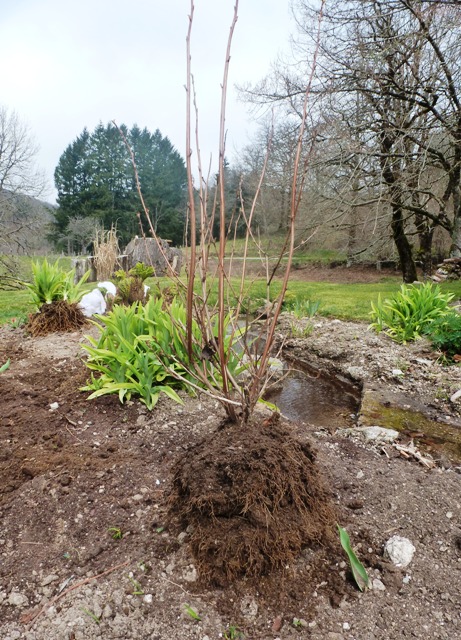 Shrub on the move!

Whether you’ve planted a deciduous shrub in the wrong place or feel that it’s outgrown its current position, here’s a useful link, should you need it, to how to transplant shrubs.

Finally, this last Sunday saw the big dig at Le Jardin Perdu. With morning frosts diminishing and the days warming up, I decided it was time to dig over the vegetable patch in preparation for planting out. Early weeds were removed, all the small stones brought to the surface by this winter’s frosts and rain were collected up and finally a layer of fertiliser was applied.

Voilà, after a back-breaking day the vegetable patch is now raring to go, as am I, but I hadn’t better attract the disapproving looks of our French neighbours by planting out just yet! 😉

And thus another exhausting weekend was spent in the garden. I did however manage to also enjoy a couple of glasses of crisp, white wine in the sunshine whilst admiring my hard work!

The good weather is set to remain until the weekend, when it looks like most of France will become engulfed by rain, so get out into your garden quick and get a few things moved!

'Time to move' has no comments